It looks like some of you got lost in all the Math.NET subprojects and codenames. Math.NET evolved over time, with projects splitting into separate new projects, the introduction of codenames and new projects replacing older ones with a slightly different focus and approach. Unfortunately this lead to a mess (sorry for that!), so I'm trying to throw light on it by the following small chart, depicting the Math.NET Project history: 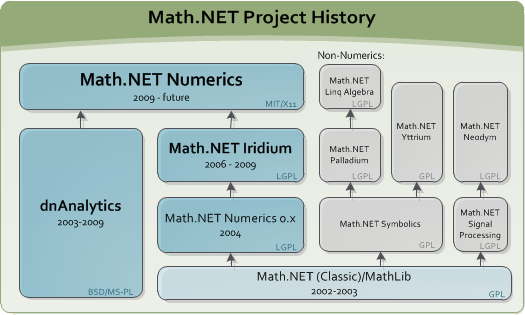 It all started with MathLib which was a very verbose object oriented computer algebra approach, including all kind of numeric routines to back the symbolics, including basic linear algebra. At the same time dnAnalytics was founded independently and unrelated to Math.NET, focusing entirely on numerics and statistics, leveraging highly optimized native libraries for better performance.

Soon it became obvious that it would make sense to refactor out the numerical aspects of MathLib to a separate project and to develop it independently, so Numerics was born, as well as several other non-numeric subprojects. Numerics became Iridium, and in 2009 Iridium and dnAnalytics finally decided to join forces and work together on the new Math.NET Numerics project, replacing both Iridium and dnAnalytics and entirely unrelated to the early Numerics 0.1-0.4 back in 2004.

Mostly thanks to Marcus and Jurgen, Math.NET Numerics is very well alive and active. Check out our source code repository and forums.