To ensure we understand the same thing when talking about signals, ports and architectures in the yttrium context, I try to give a short high-level introduction in this article.

In a classical computer algebra system (CAS), expressions are organized in trees. For example, the infix expression A*(B+2) is represented as a tree with * as root element and children A and B+2, where the second child is represented as a subtree with + as root and B and 2 as children. In a simple case, all the leafs of the tree are symbols (variables and numbers) and the other non-leaf nodes define arithmetic operations on their children. Evaluating such a tree is simple: For every operation you first evaluate its children and then execute it on the actual child values, in a recursive way.

Yttrium replaces those trees with graphs. There's no root node anymore, all nodes are equal. Nodes are stateful, so they always have and know their value, you don't have to walk through the whole tree to evaluate its current value. Instead, if a value is changed, it automatically propagates through the graph. Therefore yttrium uses a push model for evaluation, instead of a pull model like classic CAS. In yttrium, these nodes are called Signals; the graph is called a System. Instead of expression manipulation, yttrium is all about system manipulation and simulation. Of course, an algebraic tree-like expression may be represented as a system, too.

From Signals to a System

A signal may have a value and various properties and constraints, but does not have any information about operations and relations to other signals. Instead, signals are connected by Ports. A port maintains a set of input and output signals, and a set of buses.

What kind of operation or relation a port stands for is defined by its Entity, a contract specifying the port interface (number of input and output signals, and attached buses) and its symbol and type (e.g. '+' & Std.Add, or 'sin' & Std.Sine). 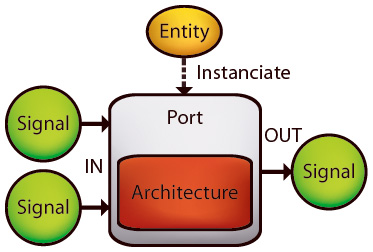 Notes about the naming

Some of you may have noticed that the naming is quite similar to VHDL (btw, there are also processes in yttrium, just like VHDL processes). It's not only the naming: the simulation scheduler should be able to simulate whole VHDL models, too. However, there are some important differences, so you better not relay too much on your VHDL experience when working with yttrium.

If you speak German, you may also checkout another more detailed article on the yttrium website.

There's no need for buses here, just use '=' as an operator as you would use it in the next best CAS like maple.

A is a simple assignment, while B is an equation (that could be assigned to a variable/signal if needed). Your example with two '=' could easily be modeled with three input signals to the '='-port, one for each term:

Of course you need algorithms to symbolically solve those equations if e.g. only A and C are known but not B.

I think I see what you're up to. Theoretically we could work with Buses and something like Factor Graphs - is this what you have in mind? You don't want to build explicit equations at all, just model a system. Such a system contains loads of implicit equations (automatically), which could hopefully be solved with simpler and more local algorithms (Factor Graph like). Does this come close?